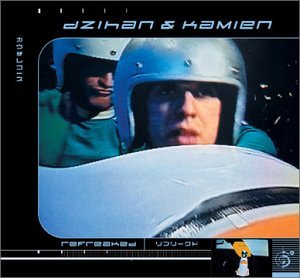 "h3"Amazon.com "p"Eight tracks from Dzihan amp; Kamien's debut album get the subtlest of rerubs. No major missteps here, but then again neither are there any mind-blowing revolutions, with most of the remixers opting for slight changes over complete overhauls. Fauna Flash inject a little adrenaline into "Just You amp; I." Hefner unfortunately steers the proceedings in the other direction with a lethargic reading of "Slowhand Hussein." Eddy amp; Dus keep the pop structure of "Smile" mostly intact, simply throwing in a little extra mellow percussion, while Fox 42 engage in a slightly more adventurous, trancier deconstruction of the same track. At Jazz bring "After" out of the humid confines of the Ramp;B club and into the vast skies of the outback. Mum are the only folks who truly get their freak on, reducing "Streets of Istanbul" to a tapestry of human groans and low bass burps. Throw in two agreeable Dzihan amp; Kamien tracks not available on the original record and you've got yourself almost an hour of dependable, if not definitive, downtempo. --Bob Michaels

"Preparing a remix album is like going out for a night in Las Vegas," says Mario Kamien. "You never know what you're going to get." The Viennese duo of Vlado dZihan (pronounced Jee-Hahn) and Mario Kamien (pronounced Kammy-en) rolled the dice by inviting a number of producer friends to remix tracks from their first album, last year's Freaks amp; Icons. What they got was a winning handful of tracks, ranging from trippy down tempo to abstract spacey excursions. The gamble paid off handsomely, and Refreaked is the result. Actually, Refreaked has been in the works for a long time - even before the release of Freaks amp; Icons. dZihan amp; Kamien's initial success came with the Eurodance hit "der Bauch" (literally, "the belly"), which they released with their band MC Sultan. This was followed by the release of the single "Before/After" in 1998 -- and almost immediately, the remixing began. Matthew "J + M" Herbert's remix of "Before" and the Atjazz remix of "After" served as a musical prequel to dZihan amp; Kamien's first album. Both remixes, appropriately, appear now on Refreaked. "We have always been curious about how different people reshape our music," Kamien says. For this project, the duo approached a diverse group of artists. "Most of them we know personally. For some we did a remix -- Menu B, for example. Some guys we know from DJing and playing music on stage (Fauna Flash, Eddy amp; Dus, Mum)." And of course two were already known quantities: Atjazz's "After" mix sported pounding rhythms and swirling ney (an Arabic cane flute). Herbert's "Before," with its minimal vocals, choppy keyboards, and acid jazz drum programming, sounded like after-hours at some modern version of the legendary Hot Club de France. Several of the remixers seized on dZihan amp; Kamien's longtime love of Near Eastern music. "The Eastern or ethnic vibe is part of our DNA," Kamien explains. Mum's remix of "Streets of Istanbul" fires a machine gun of very Western samples, but then mixes in Middle Eastern sounds to provide a melodic center to the piece. Perhaps the most inventive and original remix on Refreaked is the UFO version of "Homebase." A trip-hop opening with a modal Near Eastern tinge leads to an increasingly virtuostic display of sampling over a drum'n'bass groove. "The UFO remix is like playing poker and having a full house," Kamien marvels. "It's wonderful." The mix of cultures in dZihan amp; Kamien's music is simply a reflection of their own backgrounds. dZihan was born in Sarajevo, in the former Yugoslavia, and grew up with the Balkan's fertile but volatile mix of European and Turkish cultures. Kamien was born in Switzerland to German and Italian parents who in turn were of Polish extraction. Freaks amp; Icons used sounds culled from hours of recordings the duo made in Turkey, and on Refreaked's interactive CD, a Flash animation program actually lets listeners see dZihan amp; Kamien walking through a bazaar in Istanbul while "Homebase" is playing. The visual and interactive components of Refreaked are extensive. "In one section you can mix your own version of 'Homebase,'" Kamien explains. "There are four samples - drum loop, flutes, kanun (a Near Eastern zither), and piano - that can be initialized through your mouse." Information about the artists is also encoded onto the CD. You might not learn why dZihan spells his name with a capitol Z ("his old printer couldn't print a small z, so the big Z took it place," Kamien quips), but you'll find bios and contact information, along with two additional Flash animations. "Slowhand Hussein," one of the record's more memorable titles, proves to be a langorous but somehow still rocking blend of unusual sounds, featuring the Turkish oboe or zurna. "I Guess She" uses cryptic vocal samples and trippy, minimalist keyboards to buoy the Arabic-sounding strings, and then turns the word "to" into a part of the percussion track. "Just You and I" is a musical caravan whose peculiar version of the famous Silk Route apparently includes stops in Hollywood and the clubs of East London. And then there's "Smile," an attempt at a conventional song gone seriously awry. With its warped production techniques, and its waiflike vocals constantly battered by electronic intrusions, "Smile" manages to be beautiful and perhaps slightly disturbing simultaneously. dZihan amp; Kamien aren't above flaunting their skills in the studio either. On "Spacewater," they mix spacey, flowing synthesizers and gentle piano filigrees with a relentless, impossibly syncopated series of beats - an odd combination, but one they handle with surehanded ease. Since both musicians are performers as well, dZihan a keyboardist and Kamien a guitarist, they are looking forward to further refining their skills on tour with a full band. The two also tour extensively as Djs. Through it all, dZihan amp; Kamien have made a strong case for a type of world music free of political correctness, where Turkish and Arabic sounds are treated as part of the duo's cultural birthright as citizens of 21st century Europe. With Freaks amp; Icons, they're now bringing that sound to a global audience.

Trick or treat in style

See all Trick or treat in style
Featured
Deals made easy all year long.
Free shipping. Best prices.
Get your thing
Get your thing

Today's Deals – All With Free Shipping

Want to make some extra cash?